We re-worked the opening jump sequence from previous class session.  Ice did really well on this, he loves the A-Frame and the draw of it propelled him quickly over the the first 3 jumps.  I did some drills with the tunnel trying to build up the value of taking the tunnel, made a little game out of the tunnel and Ice increased his drive to the tunnel quite a lot as a result.

We had multiple Dog Walk runs, these were mostly good.  We did have 2 jumps, but I withheld the reward and Ice fixed himself for the next run.  Ice accelerates up and down the DW but he’s not travelling on the horizontal section as quickly as he can yet. 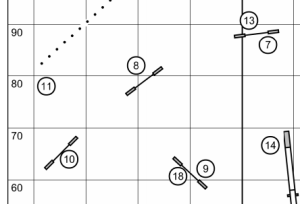 Next we ran the sequence #7 through #10 from the above course.  Ice had no problem running the sequence but I would have liked a little more speed from him.

Finally we did some work on the weaves and for the first time Ice recognized the poles as weaves and did 6 inline poles running to the Manners Minder.

We spent quite a lot of time running the Dog Walk and as a result did not have any time left in the class for the Teeter.